A little known square in the 2nd arron., Square Louvois must have the most impressive fountain of all the little squares in Paris.  It is huge!  The square takes its name from the Marquis of Louvois.  The four female figures on the fountain represent the four major rivers of France - the Seine, the Garonne, the Loire and the Saöne and the signs of the Zodiac are featured on the large marble base.  The fountain was designed by Louis Visconti and was sculpted by Jean Louis Klugman.  The fountain features in a modern day episode of 'Gossip Girl' and one of the characters was pushed into it.(Serena played by Blake Lively).  The square was created in 1830 on the site of the Theatre National de la rue de la Loi. 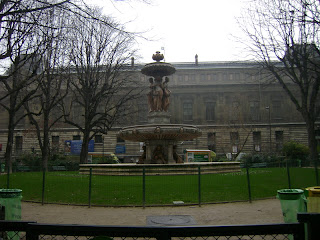 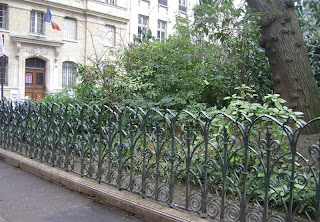 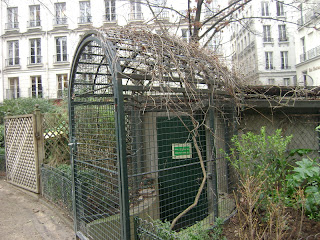 I really love the soft green fence and its Art Nouveau style, arching outwards.  I'll be watching this ugly looking arch hopefully become covered with plants as the spring and summer approach.

The Square is only one of two green spaces in the 2nd arr, the area of Paris with the fewest green spaces.  It is pretty unexpected and the fountain is impressive and draws an intake of breath when one first falls upon it.

ps behind the square is a fantastic selection of Japanese and Vietnamese restaurants and other versions of Far Eastern cuisine, for all budgets.   Well worth visiting this quarter if you like this type of cuisine and worth shopping around for some very reasonable set menus, especially at lunchtime.
Posted by Claire's blog at 00:36