Never thought I'd be praising McDo in my blog but, as I exit from the metro in the almost dark, often rainy mornings, the cheery sight of these shimmering decorations greets me and, I must admit, the sight of them does lift my heart a little.

A bit gaudy, a bit too big and not in the least natural, but still, kinda organic looking and bright and shiny and really shimmery (not managed to capture that on the photo)..... 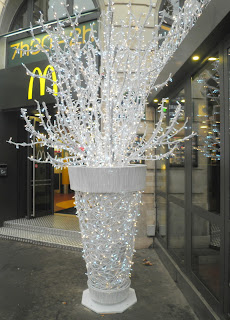 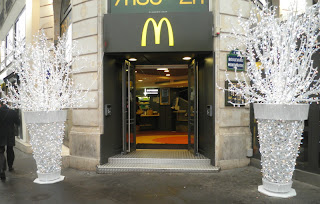 Back in late September I chanced upon another Square of Paris - Square Maurice Gardette.  It is a large square, by Paris standards (9853 m sq), and what struck me was the beautiful tall trees, the open space around them and the unusual mix of vegetation.  It had a real air of open-ness and I was amazed to find such a large green area in such a heavily populated area.

The Square was created in 1872 on the site of the Ménilmontant abbatoirs, which were destroyed in 1867. It contains trees from all around the world and a bronze sculpture called "Botteleur" by Jacques Perrin (1891).

The bandstand dates from the 19th Century and is currently used for classical, jazz and world music concerts.

There is plenty to occupy children in the Square with a sizeable playground with lots of equipment and a sand pit, although ball games are not allowed.  For the adults there's an area in which to play boules and there's a table tennis table for all ages, plus numerous benches for relaxation.

and trees from all over the world give a unique look to the landscape.  The lawn is accesible from 15 April to 14 October.

Some time ago, it seems that there was a proposition to turn the Square into a parking area and a petition to save the square was mounted.  http://sauvegardesquaremg.wordpress.com/ and a number of short videos of daily life in the square appear on Daily Motion, including a clip of the 'Salsa Square' where many couples enjoy a Salsa in the square and on the bandstand.  Nearest metros are St Ambroise or Voltaire and the Square is in the 11th arr of Paris.

I know it's not really a tree, but who could resist a Pierre Hermé macaroon tree?