I was surprised to see that my local Starbucks branch was giving away stuff!  There was a basket of bags full of used coffee grains for anyone who wanted to take them for use as fertilizer on their plants.  I took two bags - one for a friend and I emptied the other one in my compost bin.  Coffee grains are great for making compost so THANK YOU Starbucks - great ecological idea!
Posted by Claire's blog at 19:44 2 commentaires:

This is for you Lori: Mentha (commonly known as mint) is a genus of around 25 species. It's often found in wet or moist soil and has lance-shaped to rounded leaves that can be light to dark green, purple or blue-grey. Flowers appear in the summer at the end of the branches.

Mint smells great, it can be used in the kitchen or in cocktails (my favourite is with Pimms). Its flowers attract bees (which is a good thing except if you plant it near a terrace or near a child's playarea) and dries well and can be used in pot pourri. It's a perennial plant which means it comes back year after year.

It can be grown in a vegetable or herb garden, is useful for ground cover, good in rock gardens and can be used by the side of ponds to stabilise the muddy edges. It's also easy to propagate and cuttings will root at any time during the growing season. And it can be grown in shady spots or full sun.

So far, so good! The downside is that mint is super invasive. I have some but I didn't plant it myself - it's travelled under a hedge and under a wall from my neigbour's garden. You can restrict the spread of invasive types of mint by planting in deep containers and burying them in the soil or by growing in small beds, which restrict the roots. There are some types of mint that are less invasive than others, check the label when you buy. It's fine grown in containers of course although they will look bare in winter when it disappears.

I tend to chop the flowers to keep the leaves large and the branches less spindly.

In France, Corsican mint (mentha requienii) is popular for borders, paths and rock gardens. It has glossy bright green leaves with a strong peppermint smell which release a scent if they are brushed against, so it's nice at the edge of borders where you might brush against it. 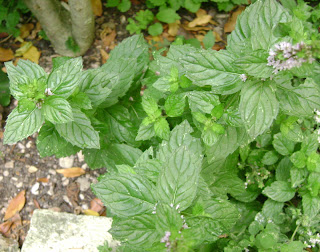 The picture is one of my mint plants that have come from next door. It's looking a bit battered and moth eaten but it still has some good glossy leaves. The flowers are just beginning to form.
Posted by Claire's blog at 11:04 Aucun commentaire:

Another simple and easy to do at home display 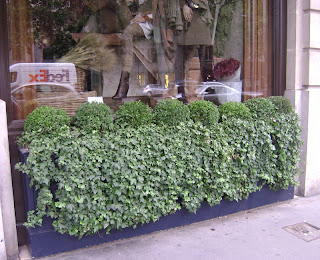 I noticed this evergreen display at the Ralph Lauren shop near the Rue du Rivoli. Box and ivy, easy peasy, stays green forever as long as you trim it in October and spring and water it (not too much). The box can be purchased as little plants but they take a while to grow, however, if you purchase box in a ball or a shape, it is really expensive. I suppose, being Ralph Lauren, they don't really mind! This display should last and last and I find it really effective. You can plant spring bulbs such as mini daffodils or crocus so they they show through in February/March too. You can adapt this look for smaller windowboxes. I liked the green/deep blue contrast.
Posted by Claire's blog at 10:34 Aucun commentaire: 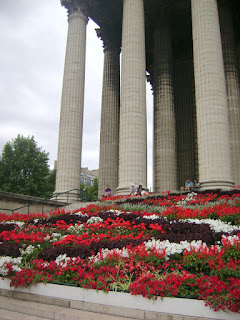 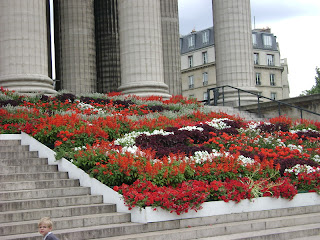 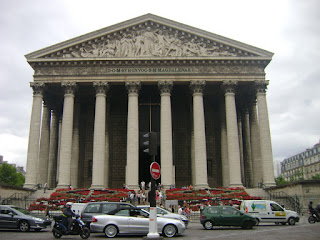 Picking my passport up at the British consulate, I passed by the Church in Madelene and I was surprised at their display: thousands of red and white flowers in hundreds of windowboxes covered the steps making a really amazing display. There were a lot of people taking photos. It's worth passing by this huge Church because they usually have a nice display of some sort. 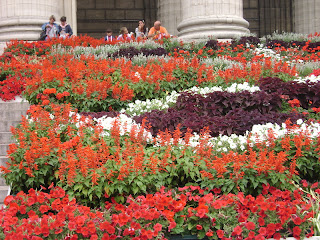 Labels: Nice to look at 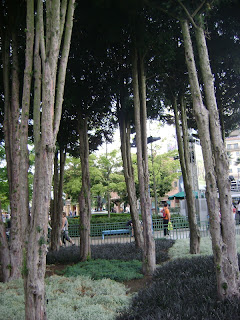 So we did the obligatory summer visit to Disney when the cousins came to stay and although I don't really like it (for many reasons), I did notice that the gardeners had really taken a lot of care to make the place more attractive with plants, flowers absolutely everywhere. They must have an enormous budget. The planting was mainly traditional type flower beds - geraniums, petunias and so but the effect was really cheerful and attractive. I noticed this mid shade corner in the Disney studios which I thought was nicely done with the tall, gnarled trees and the contrasting low growing plants below.
Posted by Claire's blog at 10:19 Aucun commentaire: