Why do confiers go brown?

I've just worked on a beautiful terrace in Paris 15th which, not for the first time, made me pose this question.

The client had an established confier hedge in large ceramic rectangular pots.  The current hedge was well trimmed but unfortunately one wall of conifers was entirely brown, the trees dead and the adjoining trees had started to turn brown.

The client preferred that I replaced all the wall. It was quite a job to tug out and saw into the conifer trunks and there was a lot of waste - the confiers were completely rooted in the pots and entwined together.  Much sawing and tugging and dirt later...... 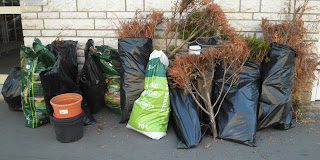 So, removing conifers is heck of a job.  How can this be avoided?
There are many causes thought to turn conifers brown and eventually kill them:-

The following words are taken from the Royal Horticultural Society website.  I'm not going to try to rewrite them nor change them because, in my eyes, you can't get better advice than the RHS:-
"Pests: Cypress aphid
Cypress aphid (Cinara cupressivora) is a relatively common cause of brown patches. A recent collaborative research project between the RHS and East Malling Research found cypress aphid to be associated with half of the cases of brown patches investigated.

Damage caused by cypress aphid develops in late spring and summer. It is found most often at the base of the hedge, but can develop at any height.Large greyish greenfly are sometimes found, but the browning often develops long after the aphids have left the foliage. Clues are left behind, including cast aphid skins and a black fungal growth (sooty mould) that grows on the sugary honeydew excreted by the pest.

Scale insects
Scale insects are found quite commonly in affected areas. These, like the cypress aphid, feed by sucking the sap from the foliage. Heavy infestations are thought to cause some dieback, but scale insect is very common and is often incidental to the problem. If there are similar numbers of scale insects on parts of the hedge unaffected by the dieback then this pest is unlikely to be the primary cause of the problem.

Diseases:
Pestalotiopsis dieback
A fungus called Pestalotiopsis is occasionally associated with brown patches, and can be seen as tiny, black fruiting bodies scattered over the affected foliage. This fungus usually attacks weakened or damaged plants, but once present it can sometimes cause quite severe die-back. Pestalotiopsis is more likely to be a problem in wet summers.

Coryneum canker
This disease is caused by the fungus Seiridium cardinale, and can cause branch die-back of leyland cypress and western red cedar. It is found most commonly on large trees, and is relatively rare in smaller hedges.

Hedge trimming
All conifers have little or no capacity to regrow from old wood. Over-enthusiastic hedge trimming can result in bare patches. The time of year when trimming is also important, even if it is just light trimming. A recent research project found that die-back appeared to be slightly more common after autumn trimming (mainly October). Trimming in the summer during times of plant stress, such as prolonged drought or hot, dry spells may also be a factor.

Growing conditions
The RHS Advisory Service believes that many brown patches are likely to result from adverse growing conditions such as drought, frost, waterlogging or cold, drying winds, all of which could inhibit regeneration from the trimmed foliage.

If the browning affects most of the foliage of individual trees, check for root diseases, waterlogging or establishment failure.

Prevention and control Prevention
Avoid trimming during hot or dry weather or in the autumn, and never cut into old wood. Trimming two or three times, in April, June and early August, is usually relatively safe. Removal of competing vegetation within 30cm (1ft) each side of the hedge, feeding the trees with a general fertiliser in late winter and mulching the base of the hedge with a 8cm (3in) layer of well-rotted organic matter should also help.

Non-chemical control
Bare patches may (depending on the cause) gradually fill in, but in serious cases this can take several years. It may be possible to tie in nearby healthy shoots to fill bare areas if these are not too extensive.

Chemical control
If conifer aphid is the cause of the problem then spraying with an insecticide such as Provado Ultimate Bug Killer may help, but this will need to be applied as soon as the aphids or the first signs of damage are seen."

I have also seen advice that advocates leaving the trees and seeing if they grow back green because they have been lacking water during the summer. To be honest I've never seen a confier recover from brown patches.  They usually get worse rather than better.

Brown patches might also be linked to pollution damage.

It is known, though, that conifers are particularly sensitive and vulnerable to brown patches so sometimes if you are planning to plant a large hedge, it's better to avoid them altogether, especially when planting in a garden as they are likely to grow fast and large and will be very very difficult to remove if they do develop brown patches.  Having said that, my neigbour has a lovely confier hedge that is under control, in good health and trimmed regularly so it's not oversized.  After a sunny day when I walk past, the smell reminds me of a particularly happy trip to the Troodos mountains in Cyprus.

I treated the confier hedge that remained in good condition and was more recently planted, hoping that this might do the trick.  Only time will tell.