In Praise of Elderly Gentlemen 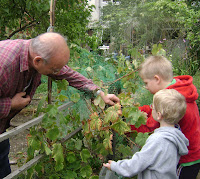 There's not much new in gardening, it's all pretty much been done before and for thousands and thousands of years human beings have been sustaining themselves and making their environments beautiful with plants and vegetables.

Which is why I love elderly gentlemen! My generation are lucky enough not to have lived through any major wars taking place in their country, we don't know rationing and growing your own through absolute necessity. Most of us in Europe grow because we can and because we like to do it. Mabye this will change? But for the moment, we are living alongside another generation of gardeners - ones that HAD to garden to survive and eat healthy food. Such as my neigbour who, unlike me, has converted his whole garden into a potager (vegetable garden). He grows throughout the year and has a large array of crops - fruit and vegetables. Also he grows flowers that his wife cuts for the house (did you know that cut flowers are the worst offenders in terms of chemical usage and some have a huge carbon footprint?) He has lots of herbs useful for cooking and grows some flowers that help protect his crops such as marigolds that can fend off bugs and so on.

We are often gardening at the same time. He's interested in my (feeble next to his achievements) efforts and he drip feeds me all sorts of useful information, tips and history of the area. I was bemoaning the poor soil quality. He said, what do you expect? This was once the flood plain of the Marne river, it's sandy and not so great quality soil, you need to dig some heavy mixture into it so it'll retain the moisture. Now for me, the Marne is a few of streets away, but that was after they built the barrages to control the flooding.....I don't like to grill him, but I am always really grateful when he ventures an opinion and he's always right! He built a little wooden frame near to our shared hedge and planted a vine on it so the children could see how a vine grows until one day in September, he met us at the door and said in a serious voice 'it's time for the vendage' so the children were delighted to pick the grapes that they had seen develop.

You might not have a fabulous neigbour like Monsieur Voisin but there are loads of elderly gentlemen ready and willing to impart valuable advice if you look for them. I thank the Portugese chap who was kind enough to advise me to throw out the tomato plants from my shopping basket in Truffaut, and to wait another week or so. As he says 'one frost and kaput' (followed by cutting of throat gesture). I'm going to wait a couple of weeks for my tomato plants in fact.

So next time you're in the garden or the garden centre, dare to speak to that elderly gentleman hovering over the aubergines and basil seeds. He's not a pervert (probably), he's a novice gardener's living bible!
Posted by Claire's blog at 19:02