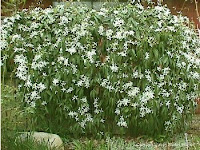 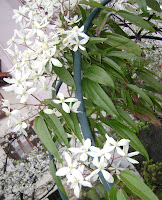 Clematis are a group of more than 200 species of evergreen or deciduous, mainly semi-woody to woody, twining leaf-climbers and woody-based herbaceous perennials from the North and South hemispheres.

Clematis are largely grown for their abundant flowers. Climbing species can be used to clothe a wall, arbour, trellis or pergola. They can also be grown over large shrubs or small trees.

Early-flowering species of clematis bear flowers on the previous year's shoots in winter and early spring. They prefer a sheltered, sunny site with well-drained soil. They are fully hardy to frost hardy.

I planted a clematis armandii a few years ago and hoped it would climb over an arch in the garden. It had a very few flowers in the first year and this year it's full of flowers which smell lovely as I pass under the arch. One year I thought it was dying as a lot of leaves turned a burnt brown/black colour. I think that was due to underwatering as it was a very hot year. Those leaves have now dropped off so it's looking a bit lopsided. After the flowers have bloomed (it doesn't last very long), the new shoots grow directly from what was the middle of the flowers and fresh tender leaves appear on the shoots. I'm hoping this year, as we have plenty of flowers, that we'll have plenty of new shoots that I can train carefully (without breaking them) around the arch to cover the side where the leaves died.

Why do I like this plant? It's evergreeen so it provides some colour in the garden and over the arch in the winter. The flowers are splendid and smell lovely, just as the daffodils are going brown so it adds a new focus point in the garden. It covers any structure to finally make a living arch. And it doesn't seem so hard to look after either.
Posted by Claire's blog at 21:33