Vines in the heart of Paris aren't as unusual as you may think.

Those in the famous Montmartre district are world famous, but there are others - often in very unexpected places, such as these at La Défense above the metro station of Esplanade La Défense, with an amazing view over the Eiffel Tower, the Arc du Triomphe and the Grand Arche.

Why here in the middle of the ultra urban environment, the skyscrapers and the transitory population of this built up city environment?

Many centuries ago La Défense used to be a small district with a hill to the west of Paris, overlooking the river Seine with a view over the setting sun over the forest of St Germain de Laye.  It was called the Butte de Chantecoq, evoking those other reputed vines.

Viticulture has been practised over twenty centuries in the Ile de France and every quarter in Paris city had its own vines.  In the middle of the 19th Century urbanisation and disease decimated the vine population.

Today it's not possible to develop a commercial viticulture in the Ile de France.  Plantation is authorised by the Ministry of Agriculture and cannot exceed 2000 vines per commune and it is forbidden to sell the wine produced.

The vines of the Clos de Chantelcoq were inaugurated on 24th May 2007 in the presence of Annie Roumanoff and Bernard La Porte who planted the last symbolic vines on the esplanade of La Défense.  The plantation is composed of 350 Pinot Noir and 350 Chardonnay vines.

There is one metre of soil underneath the vines and the urban environment encourages heat stockage during the day and slow release of the heat during the night which encourages vine growth and the maturation of the grapes.  The site is extremely well ventilated and the lack of other vegetation in this concrete jungle means that there are few diseases that spread to the vines (vines are very vulnerable to diseases).

The vines are pruned regularly to maximise the light and to aid aeration of the grapes allowing them to dry off quickly after the rain.  The first 'recolte' was expected in 2010 and 400 bottles of wine were hoped for. 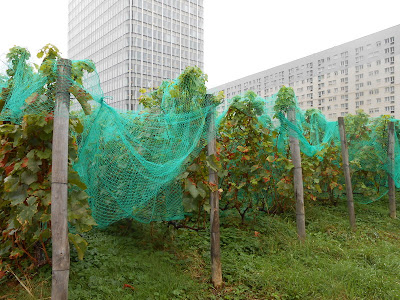 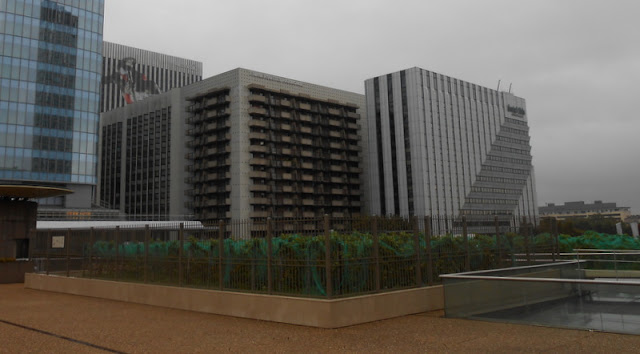 A website dedicated to the urban gardener.  Worth a look if you can understand French.
Posted by Claire's blog at 20:40