I adore adore adore this not so well known Museum.  It's all in the name isn't it?  Museum of huntin' and nature.  Hmmm, doesn't exactly inspire does it?  However, if  I was to invite you to a Museum in a beautifully and sensitively restored former private historic home in the heart of the Marais which is filled with beautiful objects and exquisitely presented artefacts and natural objects, well, how does THAT sound?  Better?  Well, expect the second description because this Museum is simply top all round.

The entrance is a discreet doorway in the rue des Archives in the heart of the Marais in 3rd arr.  The small lobby is discreet with a tiny cloakroom but the fun begins here.  Look at the animated notice telling you what to do and what not to do in the Museum, with captions in French, Latin and English and amusing characters.  It's here you begin to realise how much thought and humour has gone into making this Museum a little bit different.

The Museum is housed in the Hotel de Guénegaud which is the only private mansion still existing in Paris.  The gorgeous building was fully renovated in 2007.  The balustrades, chandeliers, door handles and screens were designed by Brazilian artist Saint Clair Cemin and are made to look like organic shapes such as vines, antlers and tree branches.  The walls and doors are painted in discreet colours and the furniture that houses the collection has been exquisitely crafted especially to display the artefacts and engravings in a really unusual way.One room has a ceiling completely covered in owl feathers, which is an installation work by Belgian artist, Jan Fabre.

The collection displayed is that of François and Jacqueline Sommer who were avid hunters and conservationists.  The Museum's introduction states that hunting and nature have always been intimately linked and that the Museum aims to help visitors discover or rediscover this harmony.

The Museum has been described as one of the most inventive and rewarding in Paris and has been described as quirky, astonishing and strange.  It is indeed all of those things.  There may be parts that shock like the grand hall of hunting trophies (that is not without its own touch of humour) but all in all, it is a tasteful and very interesting place that challenges and amazes and entertains.

The reason I mention it here (at last she gets to the point you might say) is that I had heard that the Museum had a fabulous garden but it is not accesible nor visible to the visitor.  I chanced my arm and mentioned this to the very friendly and knowledgeable guard (in fact all the personnel were very welcoming, another change from the run of the mill Musuems in Paris).  I asked if I might be permitted to catch a glimpse of the famous garden.  Well, no problem.  I was ushered upstairs back into the Museum and one of the gauze blackout blinds protecting the artefacts from the light was very temporarily lifted just for me.  What a treat!

The garden is fairly small but perfectly formed, just tlike the Museum in fact.  It has two characters - the formal French side and the wilder English country garden side.  The guard explained that the garden reflected the two personalities of the owners - one French and one English aristocrat - one very controlled but containing a sense of abandon and wildness, like nature - he preferred the English country garden btw.  I was permitted to take a few photos quickly not using flash so that not too much light entered the exhibition room.  And here are my photos (taken on a rainy day)/- 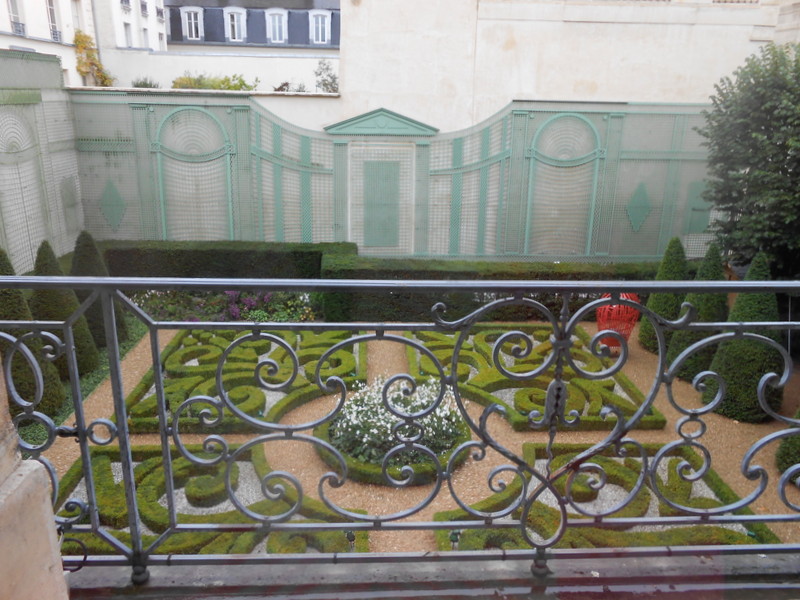 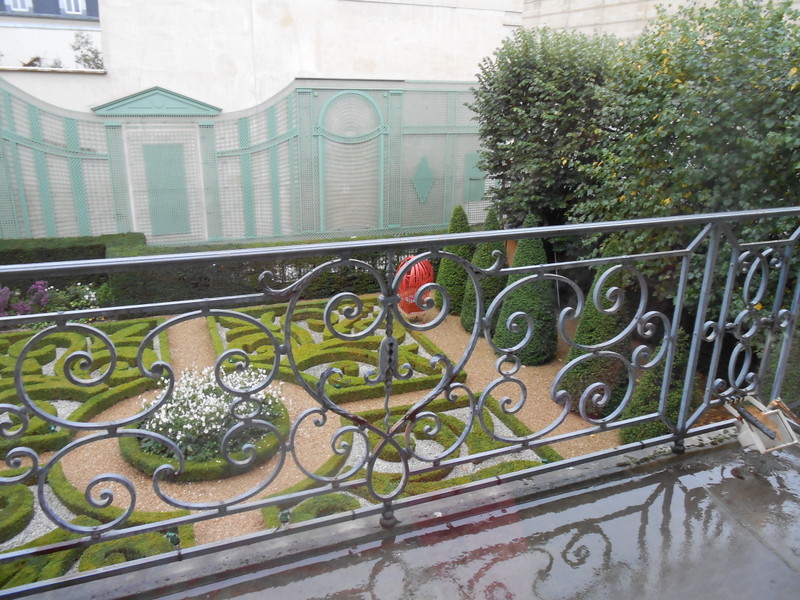 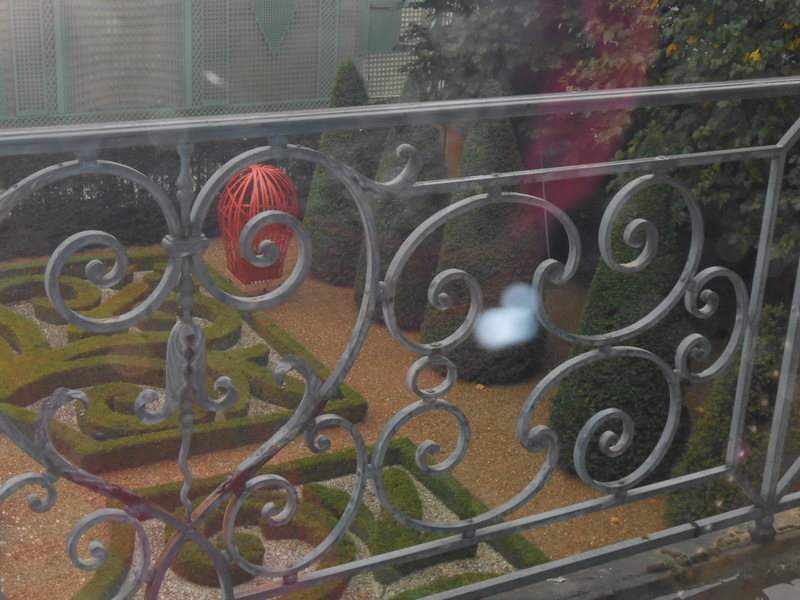 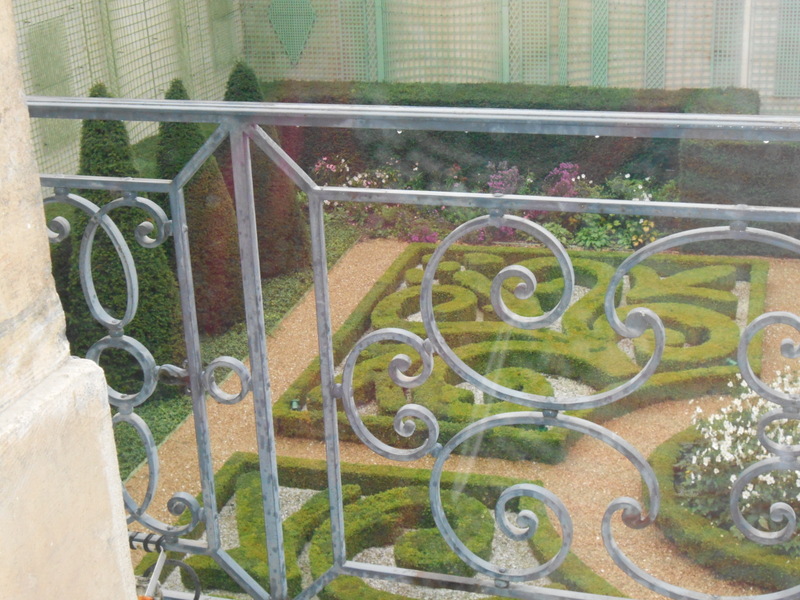 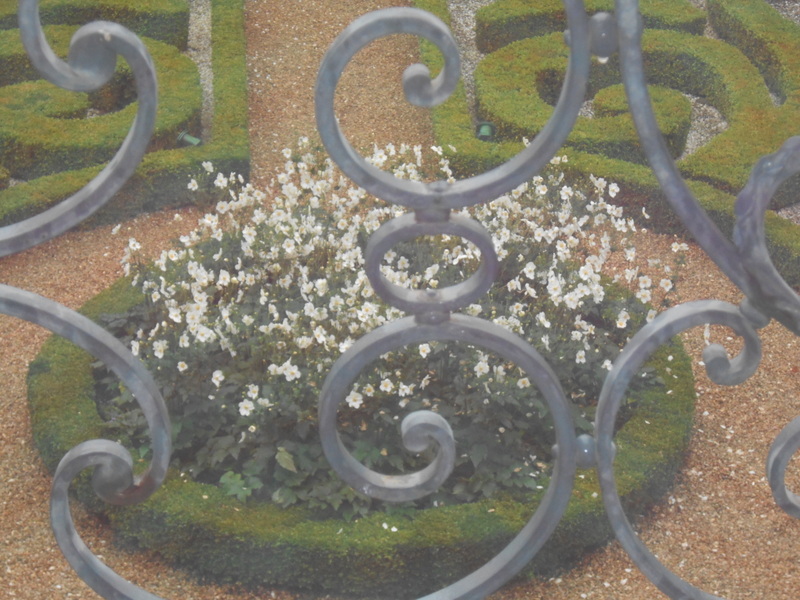 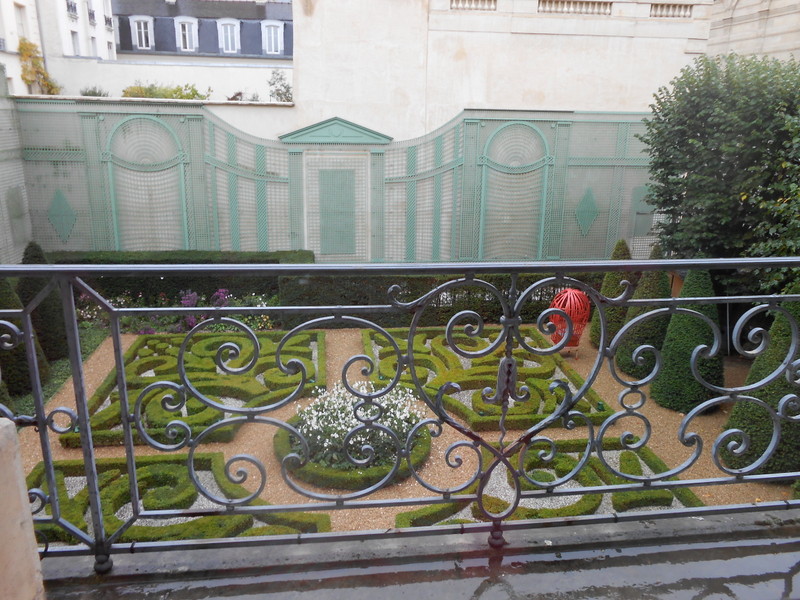 This place is a real treasure with this hidden treasure behind the blinds.  Thanks so much to the guard for his generosity in indulging me.  There was soon a little crowd around me taking pictures of the perfectly formed garden and after a few minutes the blinds went down again.