Just back from a holiday in Brittany and, as usual, I was looking out for plants and gardens. In Morbihan, the south of Brittany, the thing I was struck by was that most houses and towns had immaculate gardens and were planted beautifully, sometimes in places where you wouldn't expect. There was some lovely imaginative municipal planting and people really seemd to take pride in their gardens or window boxes. 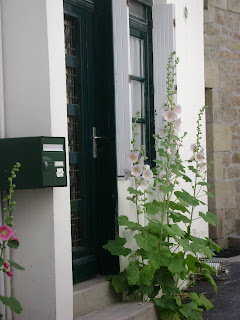 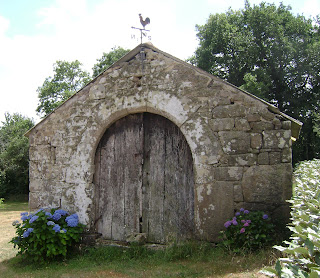 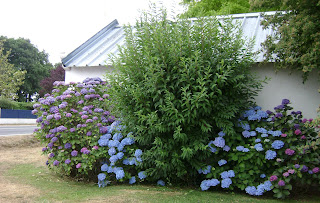 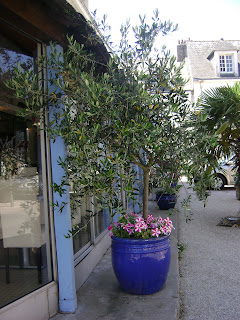 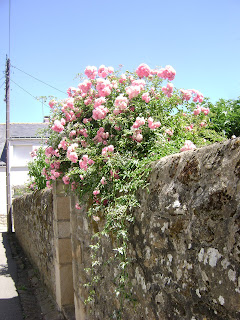 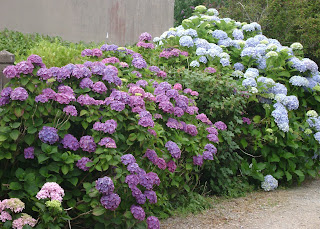 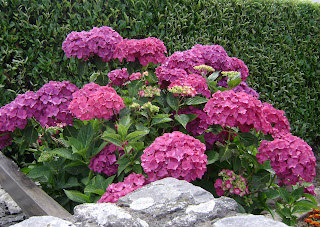 The overwhelming colours were pinks, purples, whites and the ubiquitous showy, puffy headed hydrangeas were absolutely everywhere. I'm thinking of doing more research into why this particular plant is associated with Brittany, it's really interesting as they seem to have adopted it as their very own regional plant. There are over 80 species of this plant and I thnk I've saw at least 10 - 15 of them on my travels. The colour of the flowers depends on the acidity of the soil. Acid soil with a ph of less than 5.5 produce blue flowers and alkaline soils with a higher ph produce pink flowers. In more neutral soils, colour can be influenced by the addition of a blueing compound. White flowers are not affected by ph. I saw gardens with 6 or 7 different types of hydrangeas and the colours were very mixed. I particularly like the deep pink, fucshia coloured flowers (like the 'Hamburg' hydrangeas). I even brought a necklace with three hydrangea petals suspended in glass in it to bring back happy memories!

Delphiniums were also elegantly situated everywhere, cheering up doorways, planted in twos or threes to great effect. Giant alliums were also visible, even in simple windowboxes - one or two is enough to make a lovely effect. There were also lots of tumbling pink roses everywhere, some were finishing their flowering season but others were still going strong softening the look of the harsh, sturdy (but beautiful) Brittany stone buildings.

As you'd expect from a seaside area, I found lots of grasses and ferns too. Difficult to take photos as I was mainly passing by in the car on the way to the sunny beaches, but I managed a few.
Posted by Claire's blog at 16:01