I couldn't not mention a visit to Le jardin du Luxembourg here in my blog.  I pass by many times a month and sometimes have time to take a speedy sandwich lunch there.  One May morning, I had time to spare so I took a coffee in the garden and, as well as the coffee, I drank up the lovely calm atmosphere.  The Garden is a very important green space in Paris and offers a multitude of experiences for the visitor and is an exceptionally lovely, varied park.  It  is the second largest park in Paris, located in the 6th arr.  The park is located in the garden of the French Senat whick is housed in the Luxembourg Palace. 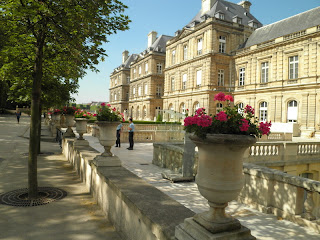 Marie de Medicis decided, in 1611, to build a palace in imitation of the Pitti Palace in her native Florence. She purchased the Hotel du Luxembourg and began construction of the new palace. She commissioned Salomon de Brosse to build the palace and a fountain, which still exists.  In 1612 she planted 2,000 elm trees, and directed a series of gardeners, most notably Tommaso Francini, to build a park.  He planned two terraces with balustrades and parterres laid out along the axis of the chateau, aligned around a circular basin. He also built the Medici Fountain to the east of the palace as a nympheum, an artificial grotto and fountain (see my pictures below; it's a very calm and beautiful place encircled by large ivy garlands). 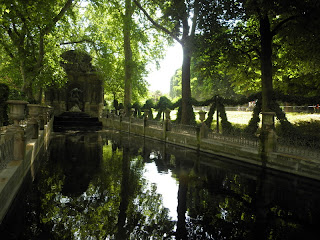 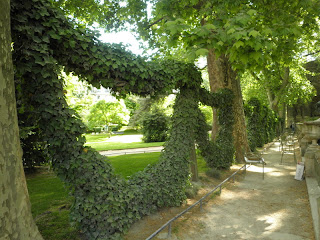 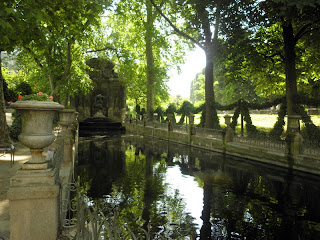 In 1630 she bought additional land and enlarged the garden to thirty hectares, and entrusted the work to Jacques Boyceau de la Barauderie, the indendant of the royal gardens of Tuileries and the early garden of Versailles. He was one of the early theorists of the new and more formal garden à la française, and he laid out a series of squares along an east-west alley closed at the east end by the Medici Fountain, and a rectangle of parterres with broderies of flowers and hedges in front of the palace. In the centre he placed an octagonal basin with a fountain, with a perspective toward what is now the Paris observatory. 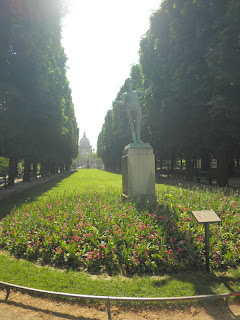 Later monarchs largely neglected the garden. In 1780, the Comte de Provence, the future Louis XVIII, sold the eastern part of the garden for real estate development. Following the French Revolution, however, the leaders of the French Directory expanded the garden to forty hectares by confiscating the land of the neighboring religious order of the Carthusian monks. The architect Jean Chalgrin, the architect of the Arc de Triomphe, took on the task of restoring the garden. He remade the Medici Fountain and laid out a long perspective from the palace to the observatory. He preserved the famous pepiniere, or nursery garden of the Carthusian order, and the old vineyards, and kept the garden in a formal French style. 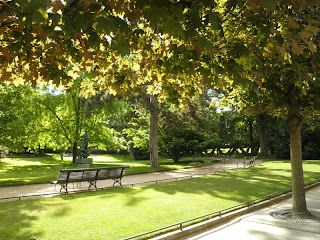 During and after the July Monarchy of 1848, the park became the home of a large population of statues; first the Queens and famous women of France, lined along the terraces; then, in 1880s and 1890s, monuments to writers and artists, a small-scale model by Bartholdi of his Statue of Liberty and one modern sculpture by Zadkine. 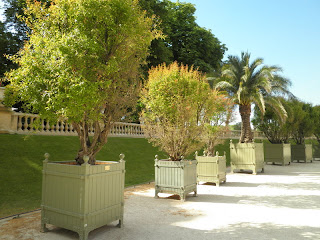 In 1865, during the reconstruction of Paris by Louis Napoleon, the rue de l'Abbé de l'Epée, (now rue Auguste-Comte) was extended into the park, cutting off about fifteen hectares, including the old nursery garden. The building of new boulevards also required moving and rebuilding the Medici Fountain to its present location.
During this reconstruction, the director of parks and promenades of Paris, Gabriel Davioud, built new ornamental gates and fences around the park, and polychrome brick garden houses. He also transformed what remained of the old Chartreux nursery garden, at the south end of the park, into an English garden with winding paths, and planted a fruit garden in the southwest corner. He kept the regular geometric pattern of the paths and alleys, but did create one diagonal alley near the Medici fountain which opened a view of the Pantheon.
The garden in the late nineteenth century contained a marionette theater, a music kiosk. greenhouses, an apiary or bee-house; an orangerie also used for displaying sculpture and modern art (used until the 1930s); a rose garden, the fruit orchard, and about seventy works of sculpture.

The garden is largely devoted to a green parterre of gravel and lawn populated with statues and centred on a large octagonal basin of water, with a central jet of water; in it children sail model boats.  The garden is famed for its calm atmosphere. Surrounding the bassin on the raised balustraded terraces are a series of statues of former French queens, saints and copies after the Antique. In the southwest corner, there is an orchard of apple and pear trees and the théâtre des marionnettes (puppet theatre). The gardens include a large fenced-in playground for young children and their parents and a vintage carousel. In addition, free musical performances are presented in a gazebo on the grounds and there is a small cafe restaurant nearby, under the trees, with both indoor and outdoor seating from which many people enjoy the music over a glass of wine. 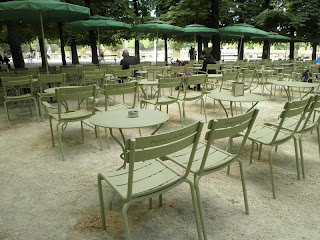 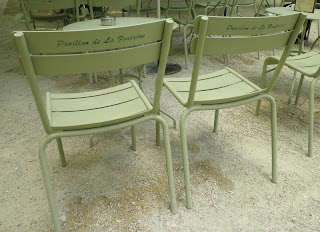 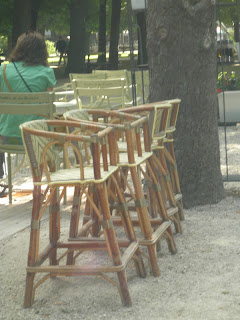 Look at these Fermob 'Luxembourg' chairs with the name of the café on the back and these cute high chairs for children.  The café is expensive but does a great 'crème'. 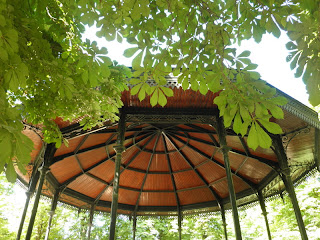 The morning I was there, two eldery ladies were practising tai chi in the stunningingly well kept pavillion.  It was very calm. 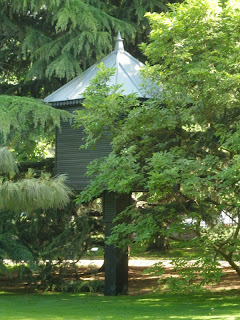 A pigeon loft.
The École nationale supérieure des Mines de Paris and the Odéon theatre stand next to the Luxembourg Garden.

Opening hours for the Luxembourg Garden depend on the month: opening between 7:30 and 8:15 am; closing at dusk between 4:45 and 9:45 pm.  It is very busy when the weather is good and can feel crowded, despite the huge spaces and it is, understandably, a very popular destination for tourists and the many students from the école des Mines and the nearby Sobonne.  The puppet theatre is still going and is very popular with children, it's very old fashioned and the owner makes sure the children stay in line!  The childrens' playground is absolutely great, fenced in, no escape and it has some fabulous games.  We had to pay a small entrance fee to go in but it was worth it.  There are tennis courts there too.

Thanks to Wilkipedia for the history.  They are my pictures and my comments, though!