It was a beautiful day yesterday and I enjoyed lunch in the gorgeous square at Palais Royale.

Enclosed as it is by the Palais Royael,  it is not an obvious garden, not a garden one notices from a distance and it's a surprise when one comes across it on the northern end through the quaint surrounding streets. It is formally laid out with avenues of trees with a central fountain and a quiet refuge from the hustle and bustle of the city streets.

Louis XIV officially gave the deed and ownership to his brother and the family d'Orléans lived here until the Revolution. In 1781, the Duc d'Orléans, later known as Philippe-Egalitié, who also owned the Parc Monceau, commissioned architect Victor Louis to enlarge the palace and shrink the garden, allowing for the construction of houses on three sides of the garden.

While Philippe-Egalitié opened the Jardin du Palais Royal to the public, he prohibited it to the police. It thereby became a place of liberty not found anywhere else in Paris.

From the 1780s to 1837, the palace was the centre of Parisian political and social intrigue and the site of the most popular cafés. The historic restaurant "Le Grand Vefour" is still there. In 1786, a noon cannon was set up by a philosophical amateur, set on the prime meridian of Paris, in which the sun's noon rays, passing through a lens, lit the cannon's fuse. The noon cannon is still fired at the Palais-Royal, though most of the ladies for sale have disappeared, those who inspired the Abbé Delille's lines;
"Dans ce jardin on ne rencontre
Ni champs, ni prés, ni bois, ni fleurs.
Et si l'on y dérègle ses mœurs,
Au moins on y règle sa montre."

("In this garden one encounters neither fields nor meadows nor woods nor flowers. And, if one upsets one's morality, at least one may re-set one's watch.")

The Marquis de Sade referred to the grounds in front of the palace in his Philosophy in the Bedroom (1795) as a place where progressive pamphlets were sold.

The courtyard at the Louvre end of the Place contains a well known artwork by Daneil Buren known as Buren's Columns.  (They were being repaired when I was there).  I shall certainly return her for some respite from the hustle and bustle during the summer. 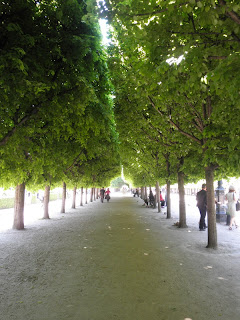 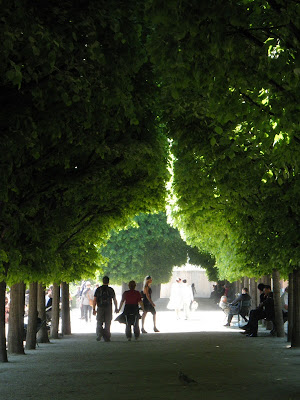 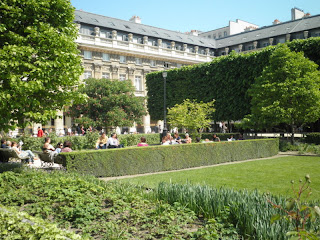 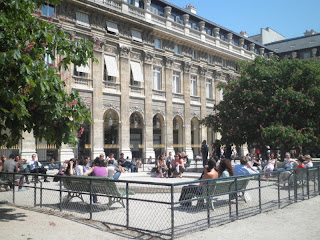 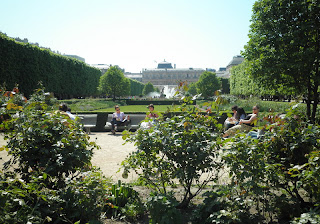 The leafy avenues gave much needed shade for us lunchtime diners.  The restauraunt terraces looking out onto the Place were full of happy diners, the childrens' sandpit occupied by fellow sandwich eaters and the whole scene was busy yet restful and very beautiful.  An added romantic touch was a couple in cream who seemed to have just been married.  If you look carefully you'll see them in the distance in the second photo strolling lovingly together along along the avenue into the bright sunshine.  So Paris!
Posted by Claire's blog at 00:44